A downloadable game for Windows, macOS, and Linux

What is Danger Crew?

Danger Crew is a retro-style RPG about being a programmer at a company.

What's the gameplay like?
A mashup of Earthbound, Super Mario RPG, and Pokemon.

How long does Danger Crew take to complete?
On average, people finish the story in 6-7 hours.

“Danger Crew has to be one of the more refreshing takes on an old school genre I've played in quite some time.” - PiroTae

“the graphical style is a nostalgic homage to quirky Super Nintendo RPGs like Earthbound & Robotrek“ - devon.dale1

“If you like charming games like Stardew Valley, then you will enjoy this one as well!” - Rummy

Join our Email List for updates & peeks at our next game

In order to download this game you must purchase it at or above the minimum price of $9.99 USD. You will get access to the following files:

That was a really neat game! I appreciate how clean and quick the combat is! You gave the option for grinding without forcing it which was a refreshing change. The music and scenes helped sell the tone, and the theming was so unique and worked out very well! Thanks for the great game!

Where is the game installed or how do I uninstall it?

I use the itch.io app to manage my games, and I think I went with the default folder. And I think the itch app has an uninstall option.

Not sure about the default folder for Linux...

I surprisingly enjoyed the game, and have a few comments  :

-Cool diversity of attacks! It really feels like I can use multiple strategies. Feels a bit sad that there're some attacks that are only available from temporary characters (But yea, hacking is OP)

-The item mischief upgrade feels a bit... abusable? It basically means that as long as an unit has a script for that, it can get 1 free danger meter blip per turn, and so using both this and dangerous script allows to consistently cast super scripts on turn 2

-I skipped the first "market console" (didn't know it had to be checked at first) and I didn't find any way to get back to it... Such situations could be quite embarrasing when temporarily locked in area without the scripts we were supposed to have found... Although I love this way to gradually get new scripts!

-On the same idea, money is not farmable, so if I, say, spend all my money on useless stuff before a boss, I couldn't get more to buy the stuff I could need to beat it... This could maybe (but rarely) be quite troublesome, especially since the game autosaves.

I just finished the game and agree with everything you said. A charming little game though. The dialog and combat kept me entertained and I felt like it was the perfect length. 5/5 Stars.

Would it be possible to have the setup program let you choose where to install the game? I try to keep all of my games on my D drive since it's the bigger one and I don't really want to have stuff scattered all over my C drive. I tried moving the program folder but that just caused errors.

Workaround: install with the Itch launcher, which lets you specify library folders.

Good thought, but no dice. All that did was download the game's installer to my D drive, which of course installs the actual game to the C drive when it runs.

That was a really nice and enjoyable game. Looking forward to future games!

Home sick and this game was a great way to pass the time. Thanks for an enjoyable day, I look forward to your future games :)

Thanks for playing and for the kind words. Hope you feel better soon!

The .AppImage download on itch only installs an empty folder and doesn't download the game. I tried the windows version but it doesn't work well.

I've never really been interested in these kind of games but this was one of the best ones I've played here! It might be because of how simple and short it is, since games like this usually have more complicated mechanics that tire me. Great game!

How do you make a React game an executable?

We used Electron for that. You build your app as if it was a normal browser React app, then include your bundle code in an Electron project to run as a Desktop app.

Okay, well, that's one of those games that's so great you have to play it all at once. Amazing!

Great game and concept, story line is fun too, I only wished for a map in a couple of sections :)

Hey, thanks so much. Our followup game will definitely have a map. :)
Really appreciate you playing!

On Windows 10... Just started... Tried to Continue Game as very first action, having no save files made.

That locked up the game? ... Gonna play through the game for real and make a good review later.

Congrats on making a game!

Hey, thanks for the report... we'll look into this and hopefully patch soon. Hope you enjoy the game!

Just finished this game. While on the shorter side and some balancing issues during battles (mostly on the player's favor, so the game does become rather easy), overall, I'd say I'm satisfied with this game and look foward to whatver the devs puts out in the future.

So glad to hear! Thanks for playing!

Okay, managed to finish it.

I feel like this has the same problem as Pokemon: battles are over too fast for status moves and complex strategy to be worthwhile. I often beat enemies through raw force long before fire (let alone memory leak) did significant damage. They're somewhat more worthwhile during boss battles, but I often had to spend so many turns cleaning and healing that I couldn't set them up.

I did actually manage to end up using some (but I don't think a majority) of my items up in the final battle, which did make me glad I stole so many battery packs at the start, but I still think keeping the items you steal is pretty overpowered for the long-term game. Just as items stolen by enemies are refunded after battle, I think it would be fair to not gain enemy items permanently.

Deadline, especially Team Deadline, was crazy overpowered due to it also filling your danger meter at double rate. This led to a cascade effect with Team Deadline, where I had already recharged my danger meter by the time it expired. Scope Stab didn't seem to get much of a damage boost, at least not enough to disincentivize Deadline. The final boss negating your deadline was good, but... he only did it once, was that intentional? Once I got Team Deadline going I crushed him thanks to action economy -- his huge HP pool didn't do him any good when I was getting six turns to his one.

I didn't realize items could be sold until very late. I don't know if I missed something, but it might do well to make that clearer.

The music was unfortunately not very memorable. Many of them had very obvious and jarring loop points; you might want to look into smoothing those in future projects.

Otherwise it was pretty fun, 3/5. (And was the implication in the ending that Drew was the hacker king?)

Thanks for playing to the end! Not Drew at the end, but a different character. They definitely look similar, though.

We appreciate the feedback and will consider these points in future versions of the game. Thanks again!

A really enjoyable game,  feels super old-school and nostalgic. I like that you can choose what you and your crew look like as other reviewers have said. The story was simple but effective, and the characters fun.

fun game! was cool that you got to choose the appearance of your companions as well. someone else mentioned curl being op and i mean, kinda? but i enjoyed taking all my enemies' stuff lol

I liked what I played of this so far, but I seem stuck due to a game-breaking bug. On Windows 10, the game sometimes throws an error when saving, and attempting to load from the main menu causes the game to hang.

Placing the confirm and cancel buttons so far apart is really awkward. I'd recommend using the RPG Maker standard of Z for confirm and X for cancel/menu on QWERTY keyboards, or making the buttons customizable.

Curl seems incredibly overpowered because the items it steals persist after battle. I spent the first chapter stockpiling items, and by the second I had more than I knew what to do with. (It might also be a good idea to make it clear that items stolen by enemies are refunded at the end of the battle.)

Hey, sorry to hear about the saving problem on Windows 10. We've heard a few other reports recently about this and will look into it. Feel free to shoot us an email (team[at]thedangercrew.com) and we can try to fix your save file.

Where is the save file located?

If you see any .json files in there, send them to us! Thank you for helping us troubleshoot the issue.

Thanks, your fix worked.

If you need more details, the error is still occurring when the game tries to save. The error is:

Why are there slurs aimed at trans people in this?

Thank you for your candid feedback and bringing this to our attention. Our intent with the character's name was never to make a trans slur; however now that you brought it to my attention I can see how it could come across as such. The character's name was intended as a homage to "Trinity" from The Matrix (with the 3 from leet speak). I am so sorry that this was so poorly conveyed. We are working right now on patching the game to correct this.

EDIT: The update is now live

Thank you for taking the time to fix!

this is such a great game! you ever consider putting it on mobile as well?

Hey, maybe someday! We're working on a new engine now that would make re-releasing on mobile way easier. Also, thanks!

yeah! that would be awesome!

This is a very fun game. It's a shame that it's so short, it was over before I was ready for it to be over . I hope a bigger & better sequel is made, I would happily spend $10 on it.

Hey, thanks so much for playing. The next game is in development now!

such a great game qq i can't remember the last time i've played a singleplayer game for hours. gives me happy feelings af, thanks for creating this c:

played the game nonstop because it was so fun and cute. the art style and gameplay is simple but engaging. thank you so much for a wonderful experience! looking forward to more games from you!

Amazing game, I'm loving playing it.
Only one comment. The skill "Copy/Paste" should be "Cut/Paste", because is cutting the item from the attacker, then, is not copying. :)

Haha, you're totally right! Def might patch that in the future.
Thanks a ton for playing!

This is a GREAT game! I got it as part of the Bundle for Racial Justice and Equality, and I was so happy to find such an excellent game on there! The graphics are adorable, the playing style is fairly easy, so it's good if you want something a bit more chill. Great storyline, great characters, get it!!

Hey Nick, thanks so much for playing! Glad you're enjoying the game, and THANK YOU for contributing to the Racial Justice and Equality bundle! 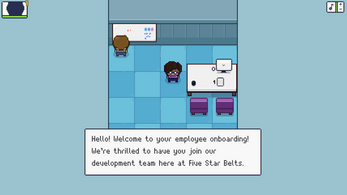 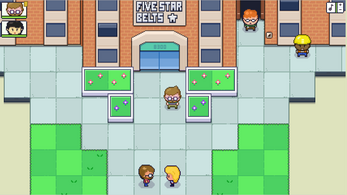 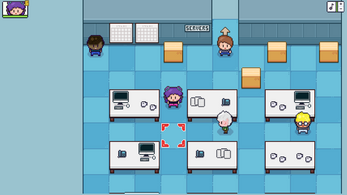 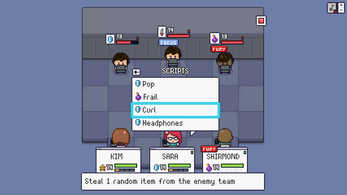 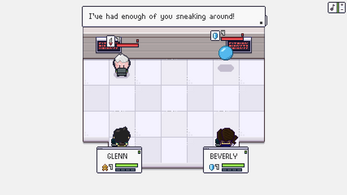